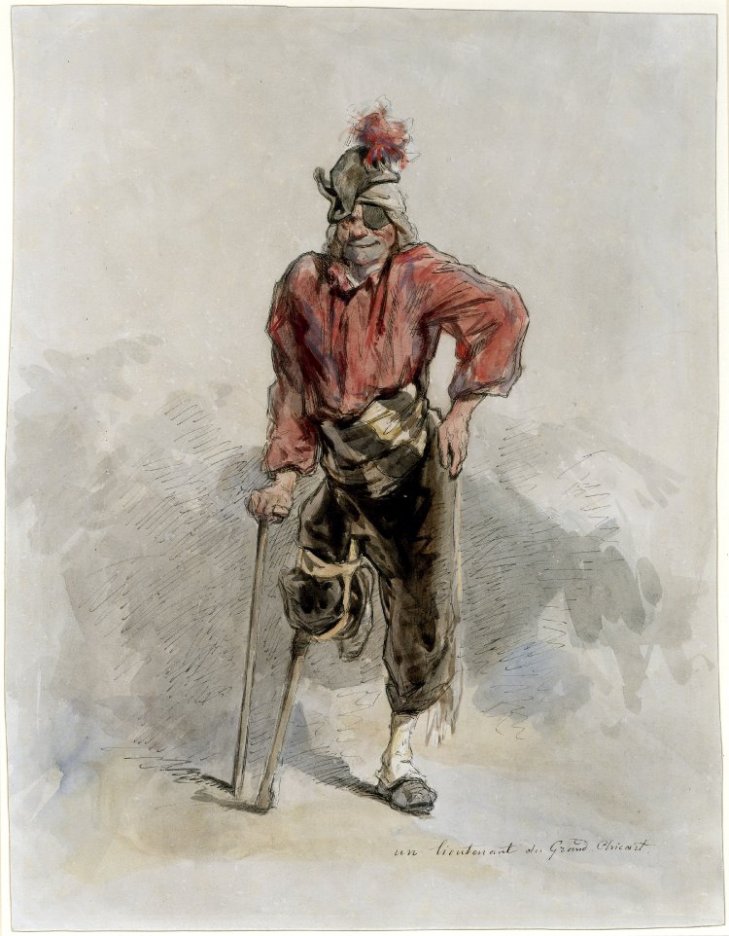 Costume illustration of an eye-patched, peg-legged seaman by Paul Gavarni for the Carnival in Paris. The popular image–trope, if you prefer–of the disabled seaman had been in place for more than a half a century by now, if not longer, in both Britain and France. This image was created between 1838 and 1843. British Museum.

So, “Did pirates wear eye patches?”

The short answer: Only if they had lost eyes to disease or injury, and this was no more prevalent among pirates than among fighting seamen and soldiers. In other words, the eye patch is in no way a sign or symbol of the pirate per se, nor even of the seaman in general.

Still, the question is a good one, if only to give us a reason to dig into related history.

The Mythbusters television show and other speculators have recently added to the myth by working backward from the proposition, that is, “If pirates wore eye patches, why would they have worn them?” rather than looking first at primary sources to see if there is any evidence that pirates wore them at all. There isn’t, other than as noted below.

The associated suggestions that pirates may have worn eye patches to improve night vision or daylight lookout observations or to enable them to fight below decks isn’t supported by any primary source material. In fact, the loss of sight in an eye, even by wearing an eye patch, causes significant loss in both depth perception and visual breadth, making movement aboard a vessel, aloft especially, very dangerous. It would also make visual observation by a lookout much more difficult.

As for fighting below decks, pirates and other seamen didn’t really do much of it: it was much easier to flush crew below decks by tossing grenades and firepots into breaches chopped into decks and bulkheads with boarding axes. In other words, the mere idea that eye patches might have been used to aid in fighting below decks shows a clear lack of understanding of the subject.

In other words: There is no historical evidence at all for any of these purported reasons why a pirate might have worn eye patches! Mythbusters and other popular “documentaries” are entertainment, not serious history. This includes “The History Channel,” now known I think as History.com: it’s “docu-tainment,” not real history. Trust me on this: if you’re being interviewed as an expert for a TV “documentary” and produce too many facts against the episode’s premise, the producers won’t put you on screen!

Again, let me emphasize: if a pirate wore an eye patch it was because he had lost an eye or was disfigured in his eye, and for no other reason!

The origin of the modern myth that pirates wore eye patches is largely literary. However, its roots lay deep in reality, both in the fact that eyes were often lost to disease and battle trauma, and that a one-eyed person often looks fearsome or sinister. The latter sense goes back millennia, and probably farther. Homer’s Cyclops, Polyphemus, is an early instance. 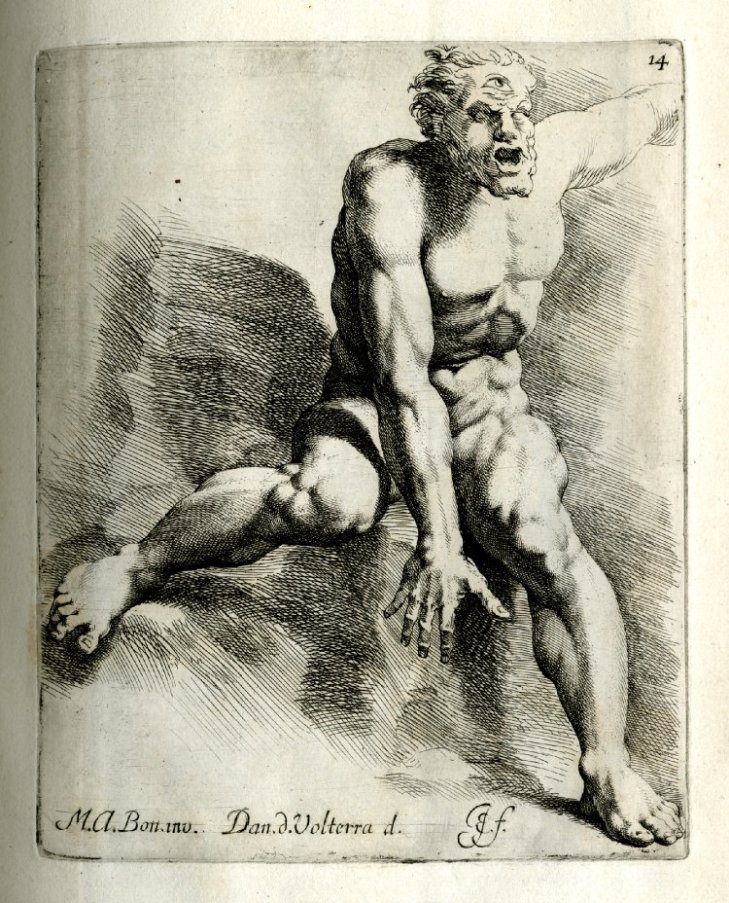 Polyphemus by Jan de Bisschop, after Daniele da Volterra, after Michelangelo, after Pellegrino Tibaldi, 1671. Odysseus, aka Ulysses by the Romans, blinded him. British Museum.

Some versions of Bernal Diaz’s The Discovery and Conquest of Mexico describe the fierce old musketeer Heredia, sent to frighten Native Americans, as a one-eyed, one-legged (or game-legged) soldier. The same work describes how Cortez’s enemy, Narvaez, lost an eye in battle. 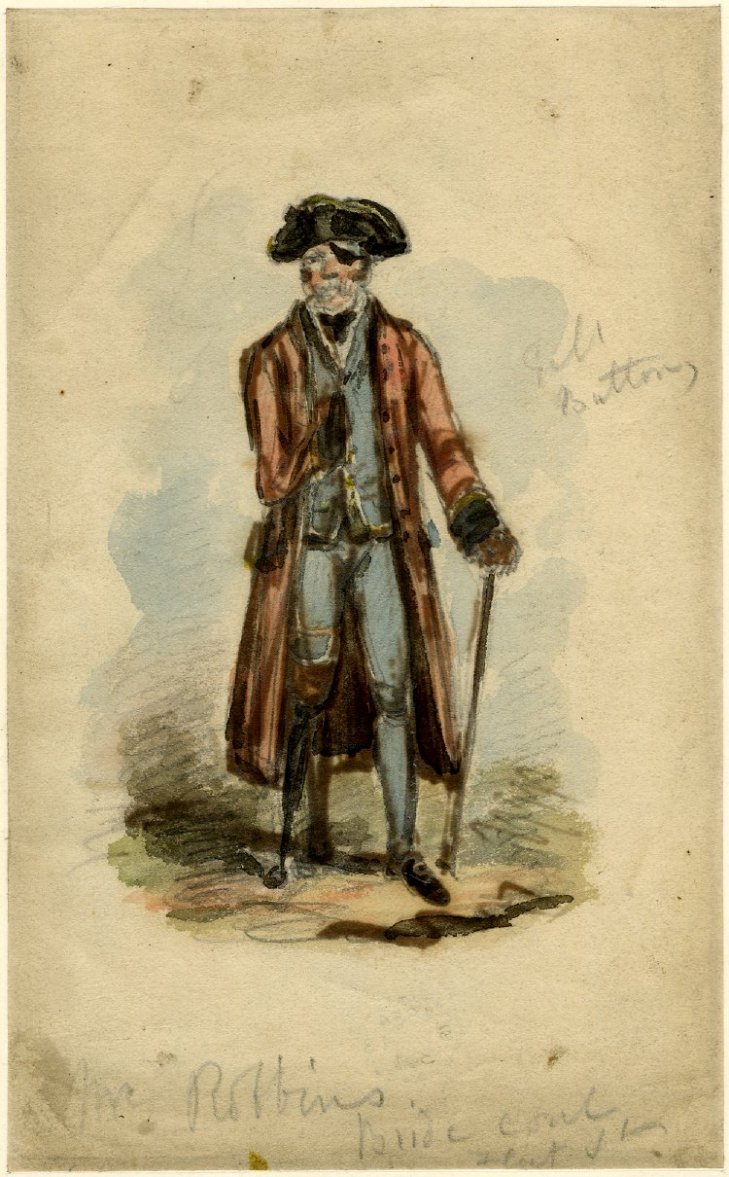 A British army pensioner with eye patch and wooden leg. Again, the image was not restricted to naval seamen, much less, and popularly, pirates. By Isaac Robert Cruikshank, late eighteenth or early to mid-nineteenth century. British Museum.

Among seafaring journals and other records of the Golden Age of Piracy, there is only occasional mention of one-eyed seamen, usually in lists of those wounded in battle. Exquemelin’s various editions of The Buccaneers of America famously list compensation for the wounded, including the loss of an eye, and it is here that the primary source of the myth of pirates and eye patches is probably to be found, in combination with other works such as Bernal Diaz’s. The loss of an eye in battle was fairly common, in fact: seafarer Edward Coxere describes the use of oakum and tallow to stuff an eye socket in order to heal the wound, for example. Notably, none of the several eyewitness images of buccaneers or flibustiers from the 1680s show any with any of the usual Hollywood characteristics: wooden legs, eye patches, parrots, hooks, &c. This is to be expected. The large number of images of seamen, usually naval, with eye patches dates to a century later. 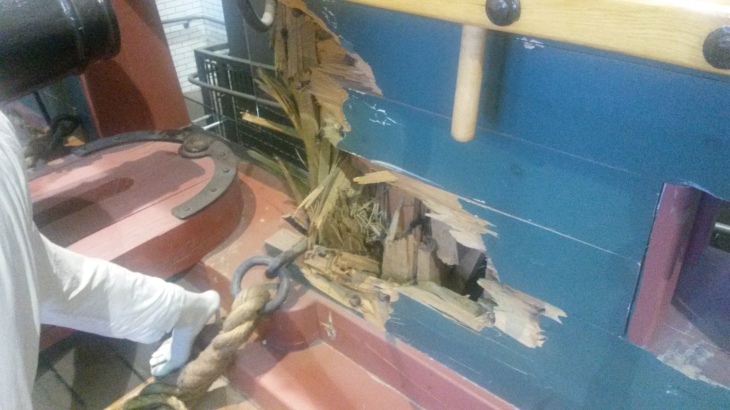 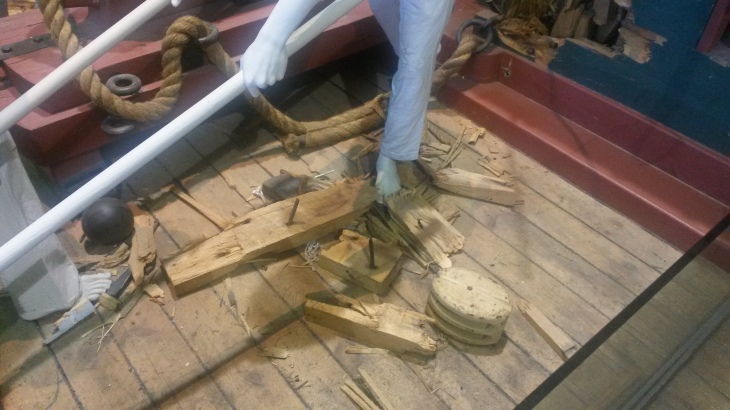 Images of splinters produced by round shot during an accurate test of the damage done in action. Author’s photos taken at the Erie Maritime Museum.

As a friend, “Tweeds Blues,” pointed out recently, it seemingly would not be surprising to find a fair number of one-eyed naval, privateer, and pirate seamen, given the damage done by splinters in action. Here I feel the need to point out yet again that Mythbusters is entertainment: one episode even suggested that splinters didn’t cause much damage in a naval action. In fact they did: there are hundreds, if not thousands, of accounts of the damage done, not to mention at least one accurate test that proves the horrible extent of damage splinters can do. The Mythbusters test parameters were simply incorrect, not to mention that overwhelming historical evidence was largely ignored, as were previous–and more accurate, historically correct–tests. The images above show splinters resulting from round shot striking a correctly-built hull section. The test was conducted by the Maritime Museum in Erie, Pennsylvania, home of the Flagship Niagara. 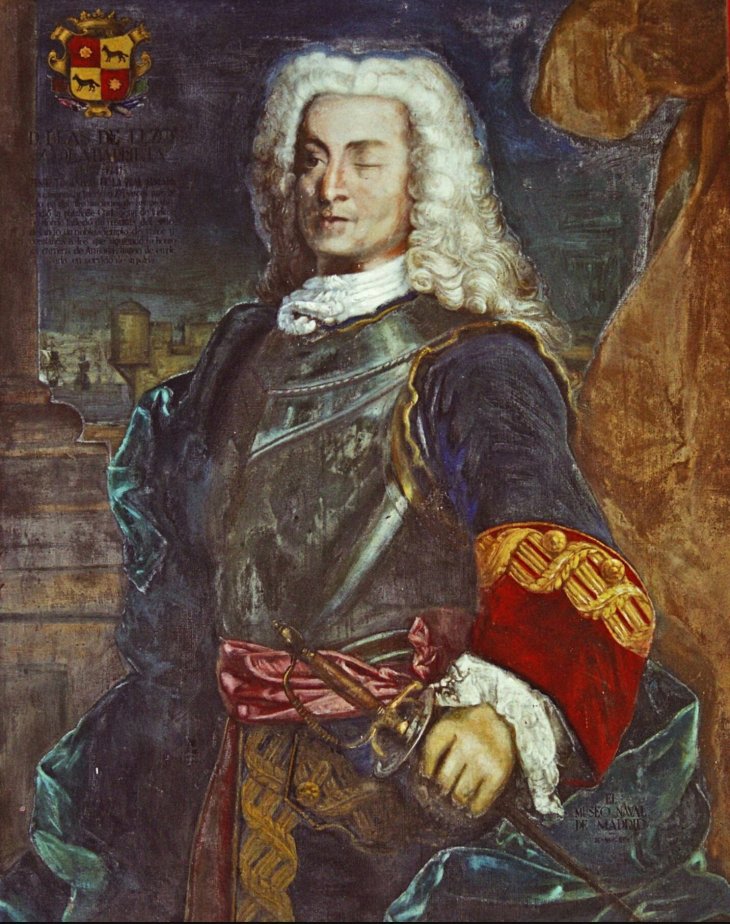 Admiral Don Blas de Lezo y Olavarrieta. Blas de Lezo is best-known for defending Cartagena de Indias against English attack in 1741. Injuries received during his naval career included the loss of an eye, the loss of one leg below the knee, and the laming of his right arm. Museo Naval, Madrid. 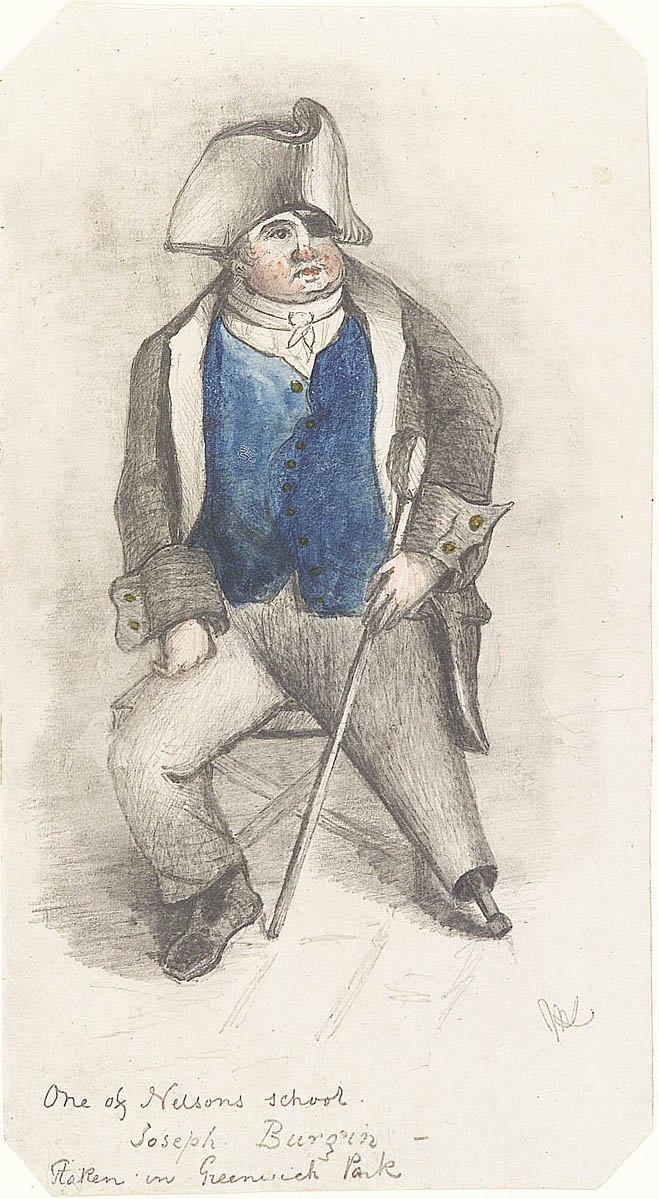 Joseph Burgin, a Greenwich pensioner, who lost and eye and a leg in action in the Royal Navy in the early eighteenth century. National Maritime Museum, Greenwich.

Of course, the most famous example of a naval mariner with an eye patch is that of Lord Admiral Horatio Nelson, who lost the sight in one eye during the capture of Calvi on Corsica in 1793–except that did not actually wear an eye patch. This has not stopped the popular assumption that he did from becoming prevalent, and, although out of our period, this has still influenced the idea of the one-eyed mariner, and therefore one-eyed pirate. Admiral Nelson also lost an arm. 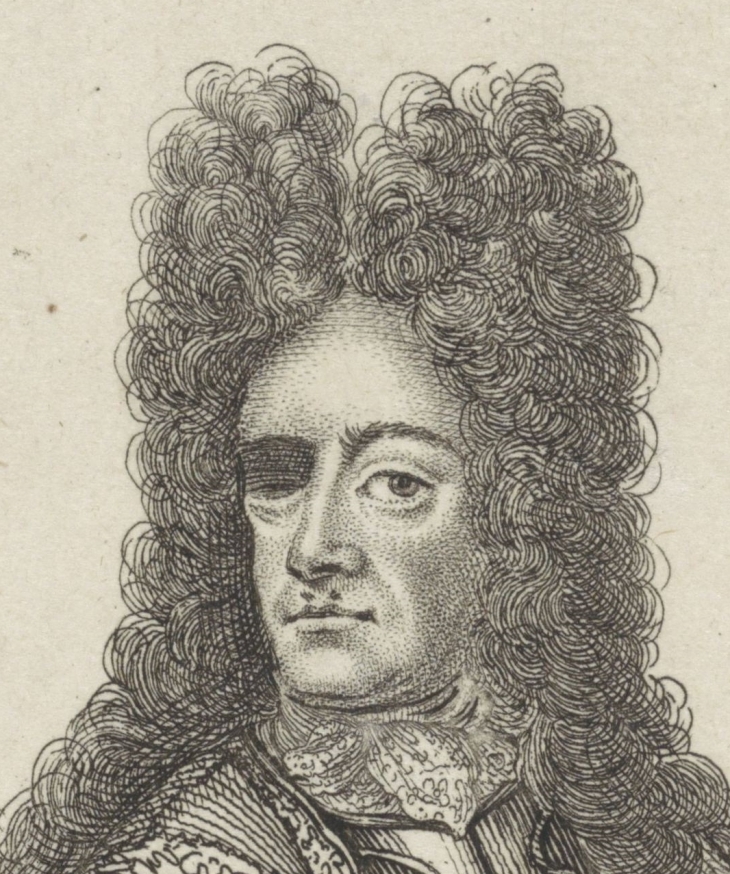 The fact is, patches were commonly used to cover any facial disfigurement. In the seventeenth century diarist and navy secretary Samuel Pepys wore a black patch, or possibly a large beauty patch, to cover a large cold sore. Similarly, King William III advised a soldier to remove the black patch covering the scar on his face because “It’s more honourable in a Soldier to wear a Scar than a Patch.” (For the latter reference, see Coke in the sources listed below.) 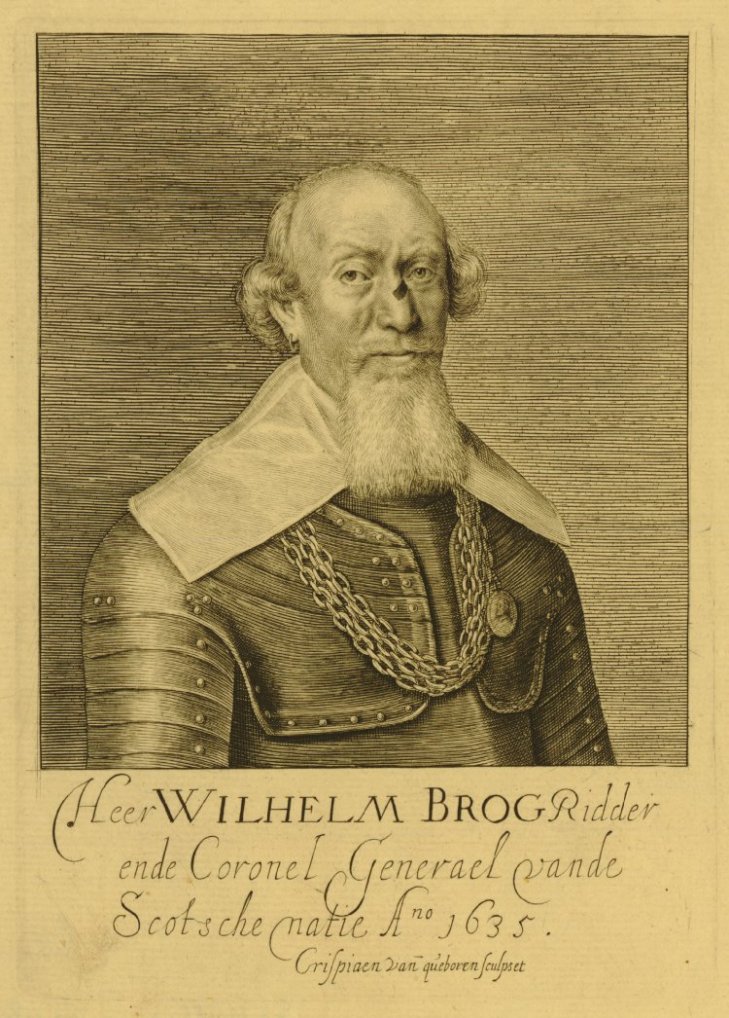 Scottish soldier Sir William Brog, 1635, with a patch covering a scar on his nose. (And an earring too.) Pring by Crispijn van Queborn. British Museum. 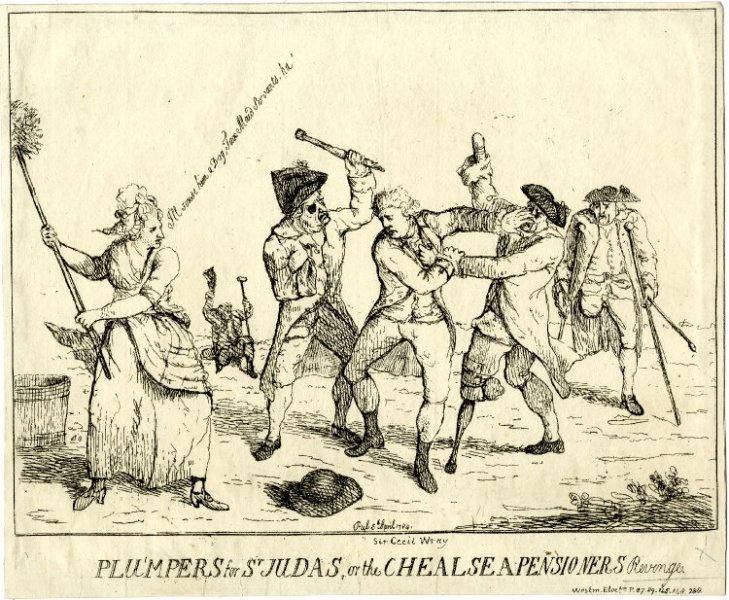 By the late eighteenth century the image of the eye-patched, peg-legged seaman was iconic, probably the result of the increased number of British naval actions brought on by the American Revolution and, especially, the Napoleonic Wars. Notably, in reality most such disabled seamen were pensioned from service, as shown above. These satirical images are probably the material origin of the popular identification of the naval seaman, and therefore the pirate, with eye patches.

Even with its legitimate historical roots in fact, this pirate myth, like many, didn’t come fully into being until the mid-nineteenth century, a hundred or more years after the Golden Age of Piracy. Sir Walter Scott in The Fortunes of Nigel describes “The noble Captain Colepepper, or Peppercull, for he was known by both these names, and some others besides, had a martial and a swashing exterior, which, on the present occasion, was rendered yet more peculiar, by a patch covering his left eye and a part of the cheek. The sleeves of his thickset velvet jerkin were polished and shone with grease, — his buff gloves had huge tops, which reached almost to the elbow; his sword-belt of the same materials extended its breadth from his haunchbone to his small ribs, and supported on the one side his large black-hilted back-sword, on the other a dagger of like proportions.” Here is the epitome of the swashbuckler, easily translated to the pirate. 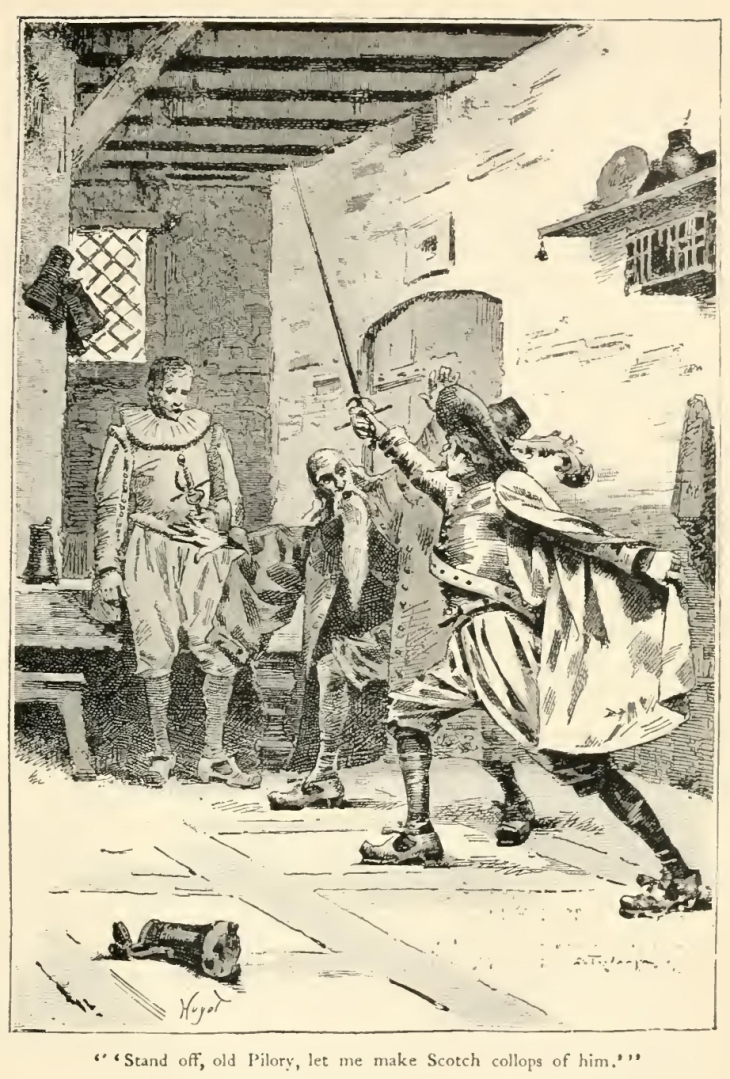 The bold and swaggering Captain Colepepper, from The Fortunes of Nigel by Sir Walter Scott. Nineteenth century, unknown edition.

Not long after, Charles Dickens described a pirate with “the one eye and the patch across the nose” and soon afterward similarly did many writers of popular fiction. However, many of our principle originators or propagators of pirate myths—Robert Louis Stevenson, J. M. Barrie, Howard Pyle, N. C. Wyeth, for example—do not appear to have bothered with this myth, although Barrie’s Captain Hook probably did encourage other images of pirates missing a vital part such as a limb or eye.

In 1926 Douglas Fairbanks propagated nineteenth century pirate myths, as well as a few he helped create, across the world with his film The Black Pirate. In it he established the modern pirate swashbuckler stereotype, based much on Howard Pyle’s Book of Pirates, Peter Pan, and probably Captain Blood (one of whose characters, by the way, was one-eyed, although he lost the eye at Sedgemoor, not at sea). Around the same time, we begin to see pirate book cover art and other illustrations showing pirates with eye patches. But it would take later films, such as The Black Swan and The Crimson Pirate  to make the eye patch an obvious, routine part of the stereotypical pirate costume.

Publicity still from The Black Swan, 1942. An eye-patched Anthony Quinn is on the right.

By Benerson Little in Maritime, Pirate Myths, The History of Piracy, Uncategorized on July 19, 2017.
← Pirates & Earrings The Night Thrust; or, More Politely, the Passata Soto →

Leave a Reply to The Women in Red: The Evolution of a Pirate Trope « Swordplay & Swashbucklers Cancel reply

This site uses Akismet to reduce spam. Learn how your comment data is processed.